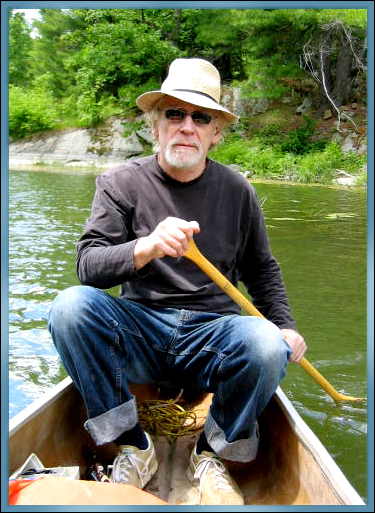 I've only recently worn the publisher's hat, though I wore the editor's hat long before that: sometimes comfortable, sometimes a little tight. Before that I wore, er, other hats. You can always talk to me in person, and on the whole, I think you'll find that more useful.

Robert Buckland was born in Ontario, Canada and graduated from McGill University, Montreal in 1966. He worked for several years as an actor and director in Canadian and American repertory companies and with CBC-TV before emigrating to England in 1969.

In London in 1970, Buckland founded the design firm James Bird and worked as a jewelry designer and sculptor until 1975, when, following a long-held interest, he entered the world of antique carpets and textiles as a dealer.

Returning to Canada in 1976, he established Rare Carpets, whose gallery on Montreal's Sherbrooke Street was a fixture of the local ethnographic art scene for a number of years.

Buckland has written professionally and for pleasure throughout his life, including assignments for CFCF-TV Montreal, Readers' Digest and a variety of periodicals. He is the author of Fatmen's Fancy, a full-length screenplay now optioned to Hudson Productions, and wrote and narrated Lights, Camera ... Hold It!, an hour-long documentary on the Canadian film industry for CBC Radio Canada International. He is partner in White Night Productions and Whisper Entertainment, Los Angeles.

As a web designer and artist, in addition to his own experimental works, Buckland has created websites for clients such as Supratek Pharma Inc. of Montreal, CJSM Publishing Ltd. of Edmonton, Integrative Medical Associates of New York and Yellow Eagle Mining Inc. of Utah.

In recent years, Buckland has become more directly involved it the publication of authors' books and in 2009 founded Ocean Cooperative Publishing, introducing a novel concept that fuses the best features of self-publishing and traditional publishing. In 2010, he and others founded a traditional small press, Encompass Editions, whose recently released The Village of My Heart's Mistake, was shortlisted for the Atlantic Book Society's 2012 Dartmouth Non-fiction Award.


If you've arrived at this page from outside the Ocean Cooperative web site, click here to go to my home page and learn more about what I may be able to offer.

You can e-mail us at: words@oceancooperative.com